The Lions Find Themselves in an Early-Season Hole

The last time I ever went to an NFL football game, Cincinnati Bengals orange and black dominated the crowd.

Carson Palmer and Chad Johnson still made for a team to be reckoned with in those days and the Bengals defeated an anemic Joey Harrington-led Lions squad 41-17.

What I forgot to mention was that this game was actually a Lions home game at Ford Field and that fans were wearing Bengals colors out of protest.

Hundreds of Lions fans who considered themselves fed up with the Ford family and general manager Matt Millen donned paper bags for the entirety of the Lions’ final home game of the season and led painful chants of, “FIRE MILLEN!”

How long did the demonstration last after the game’s conclusion?  I certainly don’t know, as my Dad and I decided to leave mid-way through the fourth quarter, feeling we had seen enough. 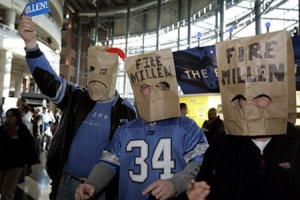 I was only 12 at the time, but “Fire Millen” still rings in my ears from time to time.

The most depressing part about this Lions memory—the 2005 season was just the tip of the iceberg named Lions Mediocrity.   After firing coach Steve Mariucci at the end of the 2005 season, the Lions went on to post a 12-52 record over the next four seasons, including an 0-16 2008 campaign that featured the quarterbacking prowess of Dan Orlovsky (don’t worry, I hadn’t heard of him either at the time).

Detroit had a football team that was the laughing stock of the NFL and hadn’t made the playoffs since 1999.  Even then, the franchise managed to take away the competitive spirit of the NFL’s greatest running back, Barry Sanders, with a constant carousel of quarterbacks and a losing attitude that forced him to retire early.

Considering this depressing history, 2011 was a breath of fresh air for Lions fans everywhere.  New quarterback Matthew Stafford went from a first-round bust with a bum shoulder to one of the best quarterbacks in the league.  Ndamukong Suh was one of the most feared players in the league and Calvin Johnson went from being called a good wide receiver to Megatron.

The Lions finished with more than nine wins for the first time since 1995 and it looked as though the franchise had finally turned a corner.  It didn’t even matter that they were thrashed in a Wild Card game matchup against the New Orleans Saints.  Being able to say the word “playoffs” in Detroit was a statement of pride in and of itself. 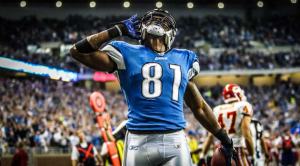 Megatron has been a huge part of the Lions’ resurgence.

This year, the Lions have begun to realize that consistency is central to growing a perennial powerhouse.  Wins are never guaranteed, and that’s a major reason why Detroit now finds itself 1-3 after losing to a young Minnesota Vikings team.

To revert back to form for the Lions is to become content with “almosts.”  The team has not lost by more than eight points in any one of the three losses, but saying, “Hey, at least we were close” is a curse that the Lions have accomplished far too much to fall victim to.

Their next game, in Philadelphia two weeks from now, could have major playoff implications for the Lions.  The scary thing is it’ll only be Week 7.

Don’t get me wrong—there’s no question the Lions have made tremendous strides since my last live NFL experience in 2005.  But what they have to realize now is that for their team and the City of Detroit, going back is not an option.